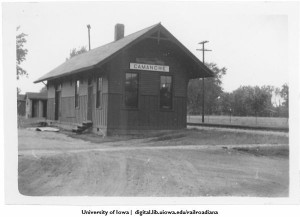 The earliest settlers of Iowa came primarily from Ohio, Pennsylvania, New York, Indiana, Illinois, Kentucky, and Virginia. Until the early 1830s, Iowa's land had been closed to white settlement. The Black Hawk Purchase of 1832 was a land acquisition made by the U.S. government from the Sac and Fox Native Americans after the Black Hawk War. The land, successively governed by the legislatures of the Michigan Territory, the Wisconsin Territory, the Iowa Territory, and finally Iowa, consisted of approximately 6 million acres of fertile Mississippi river valley.

On foot, in teams, and by boat, thousands of people rushed to Iowa. Among the walkers in 1836 was Dr. George K. Peck of Lake Pleasant, Hamilton County, New York. His ancestors had come to the colonies with the Pilgrims and his father had been a colonel in the American Army during the Revolutionary War. After searching up and down the river, Dr. Peck finally came upon a high bank that he thought ideal for a great settlement. He platted 20 ranges of 20 blocks each with 8 lots to each block, making a total of 3,200 lots, and named his town 'Camanche' in honor of the Native American tribe. (Dr. Peck erroneously misspelled the Comanche tribe's name.) Although the town was not officially surveyed and put on record at this time, Peck journeyed to Chicago on foot and sold his lots, offering free land to business people and mechanics in order to hasten its development. Peck's investment was secured when Albany, Illiniois was platted across the river and a ferry to Camanche was established. The ferry service made Camanche a busy crossing place for emigrants, and it rapidly grew into a thriving frontier town and trading post. Farm products were hauled from long distances to be sold in the Camanche market or stored in warehouses for shipment on the river steamers.

The first building was erected in Camanche in 1837 by Franklin K. Peck, son of the founder. It was an 18 by 20 foot log structure which served as the area's first hotel and was later turned into a store. Camanche served as the first governmental seat when Clinton County was formally organized in 1840 (the county seat subsequently moved  to DeWitt and then Clinton). In 1845, a smaller area of Camanche was platted by August Brion, a French surveyor, using a wild grapevine in lieu of a surveyor's measuring rod. This is still the city's first official plat. Statistics show that on October 1, 1856, Camanche had 256 buildings, 15 stores, 175 dwellings, 3 churches, 2 schools, 4 hotels, 1 bank, 2 saw mills, and 1,260 inhabitants. Towns that ultimately prospered were those connected to national and international markets via the railroad. In 1857, the Chicago, Iowa and Nebraska Line became the first railroad through Camanche. The Burlington, Cedar Rapids & Northern Railway (B.C.R. & N.) completed its line shortly after. Camanche's first depot was a boxcar.

Also in 1857, Camanche was formally chartered by the General Assembly of Iowa. It was one of only 60 original Charter Cities that were given this status before the act was prohibited in 1859. Special charters were given to assist in municipal administration at a time when the Iowa State Legislature was in its infancy, and they helped regulate everything from election processes to control over city streets and property to the organization of the city council. (At this time, only four remaining Iowa cities hold this status: Camanche, Davenport, Wapello, and Muscatine.)

In June of 1860, a tragic episode occurred in Camanche that would forever change its status as the area's leading industrial and commercial center. A terrible storm swept across Iowa bringing a tornado to Camanche that destroyed most of the town in just a few short minutes. The disaster resulted in 29 deaths, 76 people seriously injured, and the destruction of most of the town's buildings and residences. Camanche was never able to regain its commercial prominence, however, the community found the strength to endure and in later years experienced great residential expansion. Today, Camanche enjoys its standing as an extraordinary and active Midwest hometown.